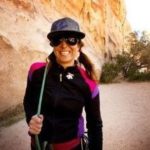 Carrie Dagher has climbed extensively throughout the united states, particularly in the west including Wyoming where she lived for seven years climbing in the Teton Range, Colorado, and California including Yosemite and Joshua Tree where she now makes her home. Carrie has also worked in South America on several Aconcagua expeditions, soloed Vallecito, an 18,000 foot peak in the Aconcagua region and also attempted to summit La Mano, a peak with very little history of climbing ascents. Carrie also spent a season in Nepal working on Mount Everest.